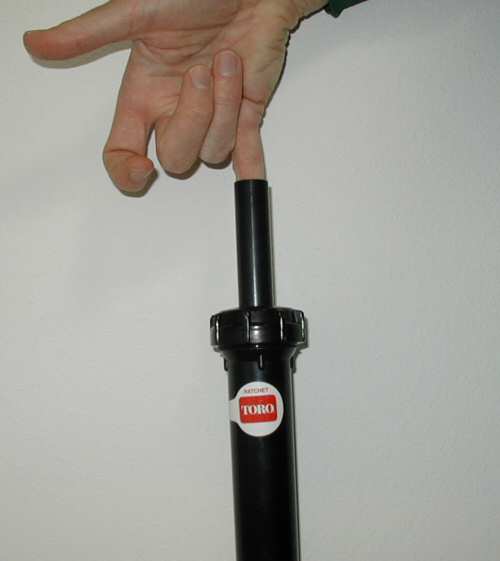 Use your little finger to pull up the riser of a Toro 570 series when installing nozzles.

For a description of each of the features below click here.

Select the sprinkler/nozzle operating pressure from the top row and read down to desired nozzle pattern to find the radius and GPM for the nozzle at that pressure.

These nozzles are for very small areas. They are often used in combination with drip systems. (But not on the same valve, you still need one valve for the drip system and another for the Maxijets.) You should absolutely install a filter on your system that provides for 150 mesh (or higher) filtration if you use these nozzles!

If you wish to use the Maxijet nozzles I recommend you use the nozzle combination shown in this table. Using these nozzles will allow you to mix quarter, half, full, and center strip nozzles together on the same valve circuit. This will not provide perfect matched precipitation, but it is the best you can get with the Maxijet nozzles.

Stream spray nozzles spray small streams of water in a fixed pattern (ie; the streams don't rotate around the nozzle.) They are used for locations where a very low amount of water needs to be applied to the soil, such as on steep slopes where erosion might be a problem. Do not use stream spray nozzles to water lawn areas. They do not provide uniform coverage for lawns and you will have dry spots in your lawn. Do not use for areas where you plan to plant seeds. They work well for established shrubs and ground covers. The small holes that emit the water streams are easily plugged, it is important that you filter the water with a 100 mesh filter if you use stream sprays.

The purpose of a bubbler is to flood the water onto the soil surface around the bubbler, where it creates a small puddle. Bubblers should be used in level ground areas only. Flood bubblers gurgle out water where it runs down the sprinkler riser to the soil. Stream bubblers shoot streams of water out from the nozzle. I recommend that if you use stream bubblers you use the pressure compensating ones. Without the pressure compensating feature they spray such a powerful stream that it rips the leaves off of the plants! I use lots of stream bubblers on my projects, they are an excellent way to water level ground areas near windows, where water spray from normal sprinklers would get on the window glass.